A friend once joked with me that I now had to move onto wearing long skirts instead of short ones due to getting older but I will likely never act my age, whatever that’s supposed to mean.  I’ll probably remain in a state of trying to figure out what I want to be when I grow up and Im sure to do so while wearing the clothing I feel expresses my personal style. I gravitate towards people living their truth in this way as well. Whether it be through their art, style or fashion. As much as I hate the phrase “Do you!” (eyeroll), I totally believe in it.  People should do what brings them happiness.

Many years ago I stumbled upon a shop in my neighborhood that lives it’s truth. I go out of my way to swing by when I have little cash to spend or I simply want a chat with the fabulous owner, Nancy Hunt. Nancy owns Brat.

It’s a small, hip boutique that pops on the otherwise quiet street of 14th near Pico Blvd in Santa Monica, CA.  Stop! Don’t even imagine those ugly ‘bratz’ dolls. This is a punk rock/rockabilly inspired store with affordable clothing, gifts and accessories. Brat opened in 2001 and the name is inspired from its roots, an homage to Bobbi Brat of The Bobbi Brat band. Before Bobbi Brat became somewhat of a legend in some California music circles she was an employee of Nancy’s first punk rock store, Na Na, which opened in 1976 selling mostly shoes like Doc Martins and Monkey boots. Bobbi Brat was a rising star at the time but died tragically of cancer in 1988.

After many years Na Na closed all of its stores, which were in various locations such as New York and San Francisco, in 2001. A sad affair in some respects but Nancy took this as an opportunity to get back to that direct touch with customers she had missed during all of her years traveling from store to store managing Na Na. “It lost it’s charm for me”, Nancy explains about the impersonal managing. She felt it was time to get back to what she really enjoyed. “I really love people and contact with people”

Brat’s punk rock style is very fitting for it’s location. It’s not often that you can walk out of a store with shopping bag in hand and have a fantastic view of a graveyard as well. The Woodland Cemetery is directly across the street. According to Nancy, ‘Bobbie loved cemeteries’, she was a punk rock girl after all, so when the real estate agent called and hesitated to offer the property due to it’s unfortunate proximity Nancy quickly replied, “I’ll take it!” 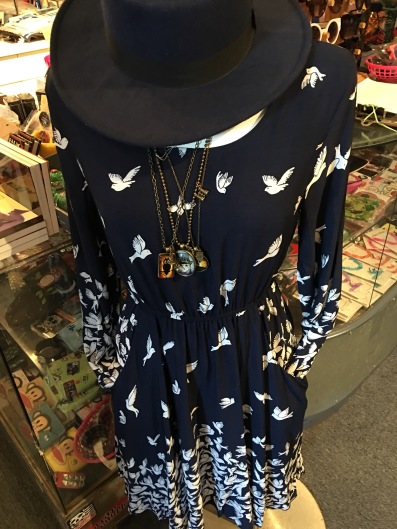 Brat is the kind of store you want to walk into, even just to peek around. The mannequins in the window look like they are having a blast. Always dressed colorfully in fun poses surrounded by interesting items and props. It’s a small but inviting and cozy shop. A lot of Brat’s style echoes that of Na Na. There’s even a picture hung in memorial of Bobbi Brat.

Despite the small space I have often found myself circling the space several times getting into a new item of interest at each turn. The music filling the boutique ranges from 50s to current punk rock. There are fun socks and accessories hanging from the wall, hat racks, sunglasses, clever gift items, baby clothing and although it’s mostly women’s clothing you can find mens clothing as well like T-Shirts, accessories, jackets and more.  She manages to fit it all in one space while not leaving you feeling overwhelmed. 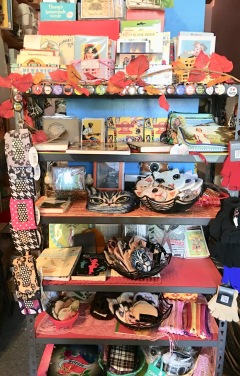 I personally own many items of clothing from Brat and they are always my most complimented pieces. An added plus for those of us animal friendly consumers is that Nancy avoids selling any leather or fur. She thrives to still  get the best quality to maintain that punk style people want without the unnecessary cruelty. “You still have that same badass look that you get from leather” She’s explains about her leather-free motorcycle style jackets, “.. and believe it or not the pleather now is such good quality it will hold up and breaths a lot more”

Another thing that makes Brat and Nancy so special is her love and devotion to her community. Brats’ home has been Santa Monica for a long time and she’s not planning on going anywhere anytime soon despite feeling the change that has occurred over time. “Santa Monica used to be called The City of Slow Growth” Nancy laments. Over the years it’s lost that touch a bit as developers take over more and more. “We’re losing any kind of people that are artist and creative people..and that hurts me”. Nancy enjoys being a part of her community as a store owner providing not only fun fashion for all ages but summer jobs for the local kids but it has changed a lot since she first started.

“When I first opened kids could still be in college, get a part time job, many of them worked for us, they could be in a band, they could surf, skateboard and still live by the beach”, Nancy explains passionately, “It was still affordable enough for these kids that we need in this community, in any community for that matter. You need diversity and creative people putting new life into a community, pushing a little bit to the edge to get things to go in the future”

Despite more industry people filling the streets than from long ago Nancy still has her core of customers that are all over the age spectrum. Punk fashion has been around for so long and still inspires young kids today to those over 70.  Nancy has seen young parents in their 20s share interest in the fashions and products with their own small children.  Her clothing is affordable for anyone from a young student to a senior citizen.

“I have grandmothers in their 80s, they are very lively, they buy moto jackets..they say  ‘I can wear that can’t I?’ and being who I am I could never deny them”, Nancy explains, “I don’t buy into that at a certain age you have to give up being fresh and trying new things. I just can’t buy into that and I never will.”

She’s proud to be so close to, as she calls them, the ‘coolest kids’ that attend Santa Monica College (SMC).  To her these are the kids in our community choosing to aspire to the arts and aspiring for more than money making careers. “Those are the kids that put themselves through that school, those are the creative kids”  Even now at 65 years old Nancy can relate to choosing passion over money. As an owner of Brat she wouldn’t call her career choice an overwhelming financial goldmine but she absolutely  loves what she does and has no thoughts or plan to retire anytime soon.

Brat clothing will set you apart from the mass market. While affordable, accessible attire is desirable from the likes of Forever 21 to Urban Outfitters, Brat is the place you can go to to spend similarly but with the bonus of having a look that’s all your own.

At Brat you will see outfits pre arranged suggesting an entire ensemble to purchase but Nancy may only suggest a smaller item like suspenders, a cardigan or hat to perk up your wardrobe. Nancy isn’t a sales person. She will never try to up-sell you. She’ll let you explore on your own or assist you in making a  purchase that fits you and only you. To her you’re not simply a consumer to be sold to. 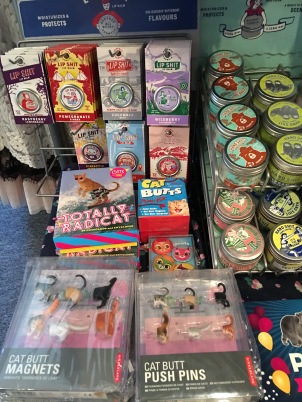 This is what I love about Brat and mostly, Nancy Hunt. I feel like I am walking into her home to say hello to one of the friendliest people in the neighborhood and oh, she also has cool stuff for sale!  Every time I go to Brat I not only find at least one thing to purchase but I also have a pleasant conversation with Nancy while enjoying the vibe and browsing. She keeps her store products fresh and updated.

Among all of the amazing items at Brat, Nancy supports her friends event by selling tickets at her store for the infamous and  popular burlesque wrestling extravaganza called Lucha Vavoom.

If you would like to support local small businesses and want unique gifts or clothing items for men, women and babies then I highly suggest popping into Brat. Click the links below for more information.

[brat]
NOUN
a child, typically a badly behaved one.

I have a passion for all things creative, original and unique. I’m usually the first one who wants to own something my friend made by hand. I myself try to create original art by pursuing my dreams of singing and song writing as best I can. From simple writers block to various life obligations my focus on this varies but one constant throughout my journey is my support of fellow artists I encounter. When I am moved or impressed by people who create or do amazing things I have a deep need help them and share their talents. From hosting events and booking talent to buying all the jewelry and clothing I can afford made by the hands of people I adore I found my niche. I’m embracing my knack for promoting all things that excite me, all things l love to hear, wear, see, eat or experience. I have taken to blogging to further share my awesome taste in friends and their creations. It’s what I like and you should like it too. View more posts